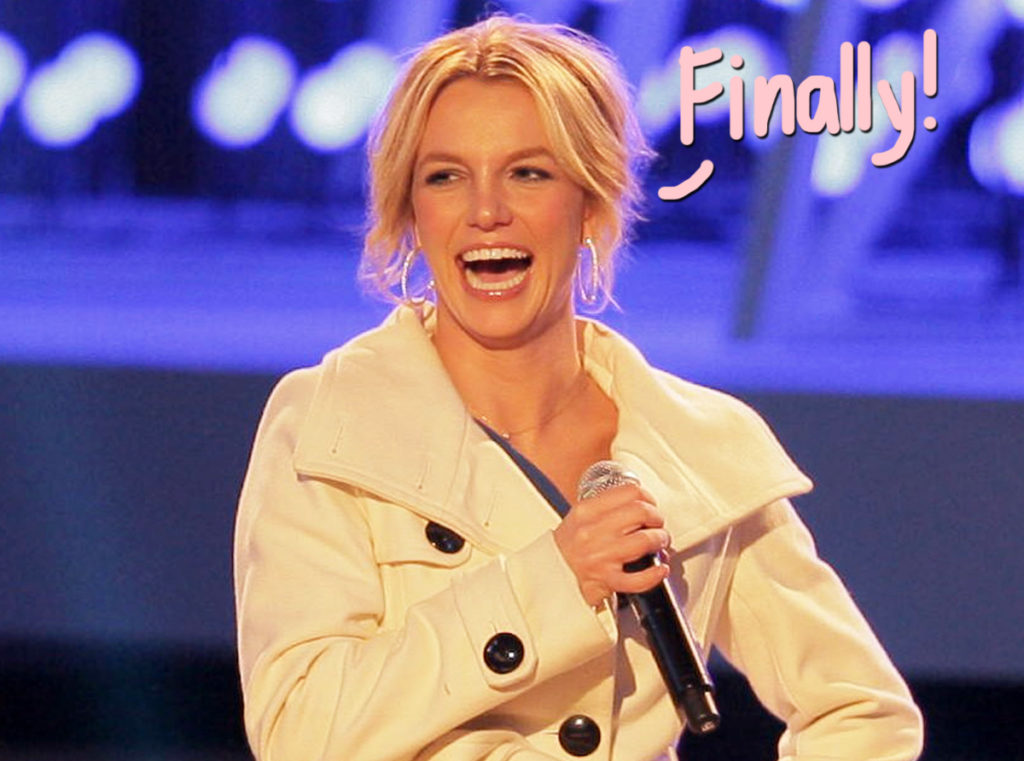 We are finally, FINALLY entering a new era for Britney Spears.

It took many years, lots of pressure from the #FreeBritney movement, and a controversial documentary to make it happen, but there are have already been some big changes in the pop star’s conservatorship — with more on the way. Not only was she able to speak up and say her piece about the situation, but she was also allowed to hire her own lawyer more than a decade after being denied the right to do so.

Related: Britney’s New Attorney ‘Moving Aggressively’ To Get Rid Of Jamie As Conservator!

Unsurprisingly, the conservatorship shakeups have got the singer feeling strong and optimistic. On Wednesday, an insider told Us Weekly:

“Britney is fighting back now because she feels support[ed], and for the first time, like she has power. The #FreeBritney movement really gave her her voice back. She felt like she wasn’t alone.”

“Britney has tried several times before to get her life back, but no one would listen. Now that Britney has found her voice, there’s no stopping her. It’s all been building up for so long and she’s ready to unleash on those that have held her away from her own life. She wants the world to know what her dad has been doing to control her life.”

“Unleash” is the right word if you’ve been following her Instagram!

Finding her voice has meant a newfound transparency on her IG page — which has so far targeted ALL the members of her family, including her sister Jamie Lynn Spears, whom she seems to be saying is only pretending to support her after years of not helping her out.

While the big changes are major, there have been little developments too, like the fact that she got to take a drive with BF Sam Asghari. Another source for People shared:

“Britney is very happy the conservatorship is now allowing her to drive. She is ecstatic and beyond grateful for all the help she is receiving right now.”

“She likes the court developments so far. She is very hopeful that her new lawyer will be able to end the conservatorship.”

In addition to her attorney Mathew Rosengart, the Lucky artist’s personal conservator Jodi Montgomery has also stepped up for her, most notably facing off with Jamie Spears. The People insider dished:

“Britney is happy that Jodi is pushing back against Jamie’s claims. Jodi has made it clear that she will do everything in her power to help Britney get out of the conservatorship.”

The Us source stated that the 39-year-old is “empowered” and “thrilled” by these developments that stemmed from her brave testimony in court. But as she’s said, there’s a lot more of her story to tell, and the insider warned that the conservatorship has been “worse than anyone knows” for Britney.

“[She’s] really happy and excited that she has new representation. She feels like she’s finally heading towards ending this.”

The Us source agreed:

“The ruling that Britney can hire her own lawyer is huge because it’s the first tool Britney has been given to fight back against the conservatorship.”

They also observed that Sam has been “a true rock” throughout the process, saying:

“He supports her and wants her to have freedom. Britney and Sam feel that they will win the fight and get to really start their lives together.”

Aww. That’s what we like to hear! We hope these new developments are just the first of many, many wins for Britney.