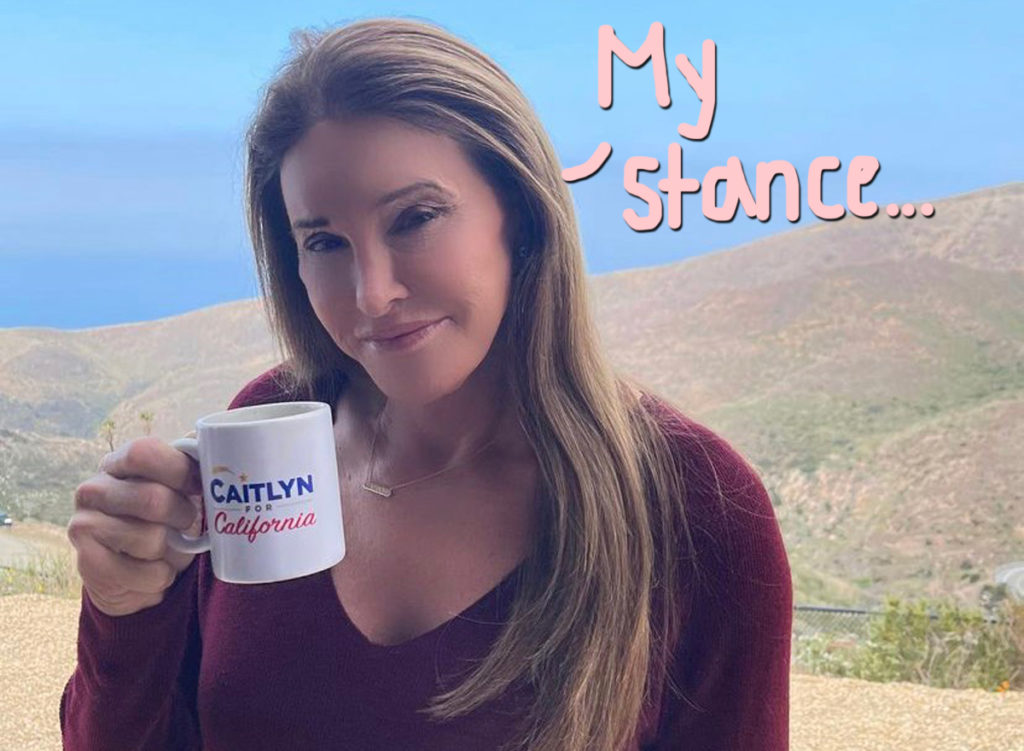 Caitlyn Jenner’s campaign for California governor is off to a cruel and disappointing start.

The reality TV star’s political aspirations were already pretty unpopular on the internet. After all, Caitlyn was a Donald Trump supporter, and is apparently being advised by the ex-president’s former campaign manager Brad Parscale. Now, voters have even more reason to be wary of the 71-year-old as she weighed in on one of the GOP’s most controversial stances.

Over the weekend, Kris Jenner’s ex told TMZ she is against trans girls competing in girls’ sports. She explained:

“This is a question of fairness. That’s why I oppose biological boys who are trans competing in girls’ sports in school. It just isn’t fair, and we have to protect girls’ sports in our schools.”

“I didn’t expect to get asked this on my Saturday morning coffee run, but I’m clear about where I stand. It’s an issue of fairness and we need to protect girls’ sports in our schools.”

As it turns out, this is the only political stance the KUWTK alum has taken so far in her campaign, as her website lists zero policies she may support as governor. It seems that she’s really following the Republican playbook to the letter by running a campaign based on culture war nonsense rather than issues that really affect constituents.

It also happens that this stance directly contradicts Caitlyn’s own words accepting the Arthur Ashe Courage Award at the ESPYS in 2015 shortly after publicly coming out:

"I also want to acknowledge all the young trans athletes who are out there given the chance to play sports as who they really are."

Can we retroactively revoke an ESPY award?

She even suggested a more accepting stance as recently as a year ago:

.@Caitlyn_Jenner continued: “I think sports is such a great way to learn a lot about yourself. And yeah, I want to, hopefully they’ll have the opportunity in the future to do whatever they can do. I’m all for it. I’m all for it.” Your words, in @outsports:https://t.co/RoYfkrgyNL

Chances are many trans people, whom the would-be politician has called “my community,” will feel hurt and abandoned by this stance, particularly in light of the spate of dangerous and invasive laws cropping up around the country banning trans youth from sports. (For the record, California is one of a few states that actually has laws allowing trans kids to compete in youth sports.) One Florida law that was narrowly defeated in the state senate would have allowed schools to “inspect the genitals of any athlete subject to a complaint,” per The Guardian. (When your policy sounds a lot like the evil assault perpetrated by Larry Nassar on hundreds of US gymnasts, your policy is probably an evil assault.)

Ruhle: "Can you give me one example of a transgender child trying to get an unfair advantage? Just one in your state, you signed a bill about it."

Justice: "No, I can't really tell you one." pic.twitter.com/RmOyWBUuZY

Unsurprisingly, Caitlyn faced a lot of backlash for her statement online. Trace Lysette, who appeared on her series I Am Cait, tweeted:

“Cait… this ain’t it. When you’re on hormones and or blockers there is not an advantage. I ran track at the club level with college girls and trust me there is no advantage. I would have went pro if I was able to run the times I ran before hormones etc.”

“Caitlyn Jenner is classically uninformed, wildly privileged, and tragically self-hating. She can go protect the integrity of f**king herself.”

If this is the best Caitlyn has to offer of her vision for California, we hope this campaign will be dead in the water soon. What a disappointment to see her turn her back on her own community in such a shameless ploy to get cozy with the GOP.

Ch-ch-check out some more reactions, below:

Caitlyn Jenner is no friend of the LGBTQ community. Don't call her an actvist. She's a menace.

Medical organizations, feminist organizations, and prominent cis women athletes, including Billie Jean King and Megan Rapinoe, have all spoken out against banning trans girls from sports. There is no evidence this is a problem anywhere.

Caitlyn Jenner is dead wrong on this.

Something tells me she doesn’t really believe the things she says to try to get Republicans to vote for her. pic.twitter.com/7bmM1yhb8A

At the end of the day Caitlyn is a narcissist who happens to be trans https://t.co/Y7ZlcPduvv

Transphobes are obsessed with “biological sex” as though being transgender isn’t a biological phenomenon. This is why I think it’s important to acknowledge transness in conversations about biological diversity. The human species is more complex than a colonial binary can contain.

Caitlyn Jenner JK Rowling
????
rich white ladies who've come to dominate trans politics the last 6 years, even though they're both clueless about trans people & issues, & most trans people desperately want them to leave us alone.

There were times I was foolish enough to give Caitlyn Jenner the benefit of a doubt, knowing she was fresh into transition, and hoping she’d learn and grow.

Now? No, she really can just go to hell.