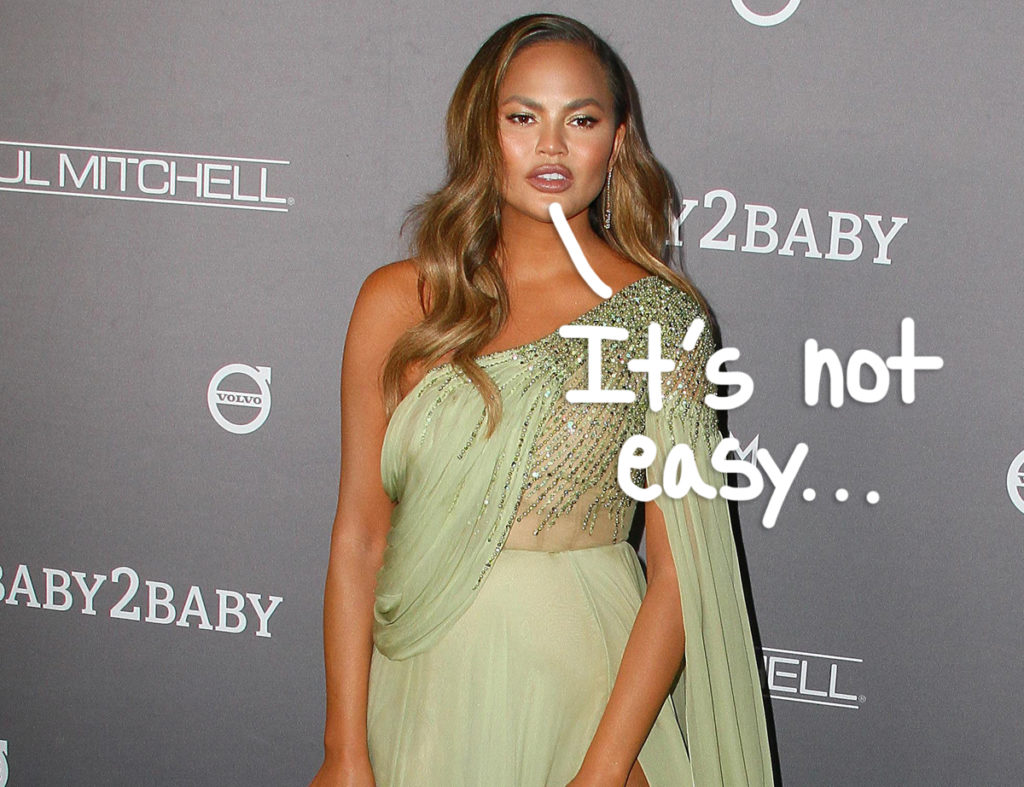 Chrissy Teigen got candid about her postpartum body nearly one year after suffering a pregnancy loss.

On Saturday, the 35-year-old model opened up about how her body has struggled to adapt since losing her baby Jack at 20 weeks due to pregnancy complications in September 2020, describing it as feeling “stuck” and paused in time.” She wrote in an emotional message:

“It’s really weird when you lose a baby and your body gets paused in time. Usually, you’d gain your ‘yumyums I’m praaaagnant!’ weight, then put on the weight of your little bebe. Then, ideally, you’d have your baby. And you would feed it from your boobs and your body would know to charge through and do what it does to get you back into fighting shape, whatever that may be, for however long it takes (F**K a snap-back)…”

“But man. When you lose a baby halfway through, your body just pauses. It has nothing to do. No one to feed. And you’re just…stuck. Stuck with saggy boobs that were prepping to be milk bags, a belly that was ready to bake. I would be lying if I said this did not majorly suck. Not only are you ummmm extremely, diabolically sad at what could have been, but you have this daily reminder every time you look in the goddamn mirror.”

Teigen then expressed how she still feels “extremely, diabolically sad at what could have been” and has to face a “daily reminder” of her son’s death every time she looks in the mirror. And while the Cravings author didn’t have any “positive words” to conclude her note, she asked her followers not to comment “nice things” back:

“I don’t really have a big ending or positive words lol. And don’t say nice things!! I know I know I promise. I know it’s not everything and I know i’m suuuuuch a badass and blah blah blah I just thought I’d be emo for a minute ok! I love you. fuck a scale!”

The momma of two later added in the comments section that “unfair is ok.” Take a look at the searingly honest post (below):

Back in August, Teigen admitted that she understandably hadn’t “fully processed” the loss of Jack, saying:

“Just reminiscing about New York a lot lately, when things were simple, thinking about all the stuff I’ve done and been through not just this year but in my life. I’m slightly down lately. It kind of started when I was thinking of my book caption and typed out ‘my third baby is here!!’ as in cookbook, then realized my third baby will never be here. Then I realized I threw myself into the book, to not think of the real, actual third baby.”

Teigen, who has been honest about her struggles with alcohol dependency in the past, added:

“Now that I don’t have the alcohol to numb it away, things are just … there, waiting to be acknowledged. I guess what I’m saying here is life is so f**king complicated.”

We really cannot imagine how difficult this time must be for Chrissy, especially with it almost being the first anniversary of Jack’s death. Sending her some love today.