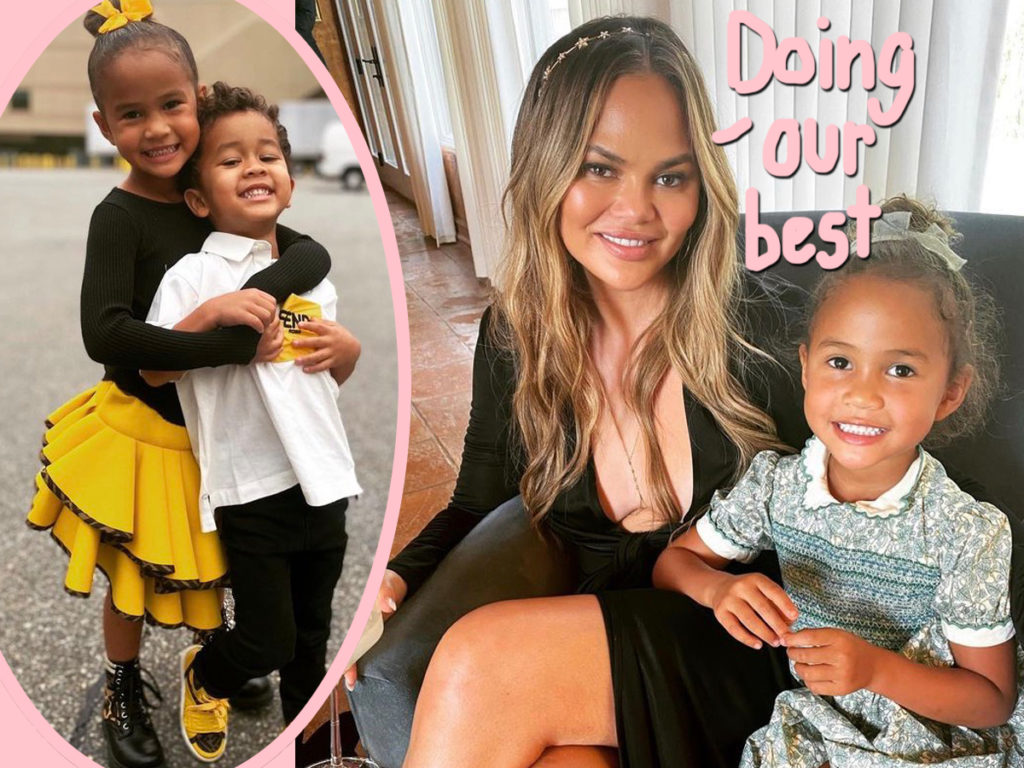 Everyone deals with loss in their own way — and Chrissy Teigen is letting us in on her family’s unique coping methods.

No one has had more of a rollercoaster year than Chrissy. From experiencing the pregnancy loss of her son Jack to getting sober for the first time to going through a “cancellation” over resurfaced bullying on Twitter, she went through a lot of her most painful moments in the public eye. However, it never stopped her from sharing some of the most intimate moments of her mourning process.

Related: Chrissy Remembers ‘The Son We Almost Had’ In Heartbreaking Anniversary Post

In a new interview with Scary Mommy, she opened up even more about how she and her kids, Luna (5) and Miles (3), have dealt with baby Jack’s passing. Recalling her tumultuous and dangerous pregnancy, the Cravings author shared:

“They saw the experience of the home ultrasounds and the nervousness of ‘This isn’t going well.’ Or it was me going to the bathroom, and Luna would be at the door when I came out, and she would say, ‘Are you bleeding still?’ She knew everything. So there was going to be no escaping it, even if I wanted to.”

“We told them that we lost him, but it wasn’t really until we got his ashes back, I think, that they started to be able to say, ‘OK, this happened. Here he is now. He didn’t make it.’ It was something for them to be able to put a story to, where we could say, ‘OK, Jack is in here and he is going to stay with us. And maybe one day we might release him. And he loves that we still think about him, and he loves that we’re still emotional about him, but more than anything, he loves that we talk about him. That makes him really excited and really happy.’ So they know that he’s still very much a part of our lives.”

Admittedly, John Legend’s brood has some unusual ways of keeping Jack a part of their lives. She explained:

“At school when they draw things, they draw him as an angel. We talk about it a lot. What felt comfortable for our family was him always being around. Whether we go on a vacation or something, they always say, ‘Don’t forget baby Jack.’ And then I have to pack him up. And then we get to where we’re going, they’re like, ‘Oh my gosh, he must be thirsty.’ This might sound crazy to people, but they’ll put a little glass of water next to his little box of ashes. And they really love being a part of it.”

Oh gosh. It might be a little strange to some, but in many cultures the dead are treated this way, including being given food and drink. It’s also heartbreakingly sweet. There’s no one way to mourn; keeping Jack close by is as good as any other.

That being said, there have definitely been challenges along he way. The 35-year-old said:

“I don’t think they’ll ever quite understand why he didn’t make it, in the way that I don’t understand. I had a placental abruption, and I keep having to ask my doctor, ‘OK, but why? Why wasn’t it able to work? Why didn’t we just keep going?’ And they were like, ‘We physically would’ve run out of blood in the hospital. Were we going to do that for 20 weeks in the hospital?’ That’s still something that I’m coming to terms with, why we gave up.”

“Honestly, the [kids] still catch me in a funk some days. And the first thing they go to is, ‘Is it baby Jack?’”

Now on the other side of a seriously difficult year, the Lip Sync Battle host reflected:

“I don’t hold any anger, and I attribute that to so much therapy. I was kind of an angry brat before. I would get riled up at the smallest things… Even at a restaurant or something, and I’d always have my guard up. I’d always be watching for people that were taking sneaky videos or taking pictures.”

“I was a jealous person. Whether it was other people’s successes — I was not bad to my friends, but I wasn’t good in the way of communication, and it was kind of a thing where my friends had to accept that I was going to be in and out. Something that always loomed over me was that I always wanted to be a better friend. My world tends to be very closed off. [After Jack died] I wasn’t getting out very much — depression can throw you, obviously. You’re hellbent on doing what you can to not be seen and not be a part of the world, and I was making myself so small by being sad and angry and bitter. “

Now, the momma claimed that “the little things,” like listening to music and enjoying “staycation” with the kids has made her feel like a “complete, whole person.” She observed:

“I needed to be shaken up, and I needed to be humbled. Before I had gotten pregnant with Jack, I wasn’t living a healthy life. The way I was treating my body was not great, with the alcohol. I was the kind of person that made fun of working out and made fun of my friends that were obsessed with their CrossFit. I just wasn’t reading my body well. So I feel like if I [had] got[ten] the chance to have him, I wouldn’t have learned how precious life is and how precious my body is. Now I look at my body as something that I can’t yell at and I can’t be upset with. It’s gotten through so much, and so much more than people even know. What it has persevered through has been incredible.”

These days, she said:

Wow! It sounds like Chrissy has gained a really healthy perspective on everything she went through. We’re glad to hear she’s doing well.