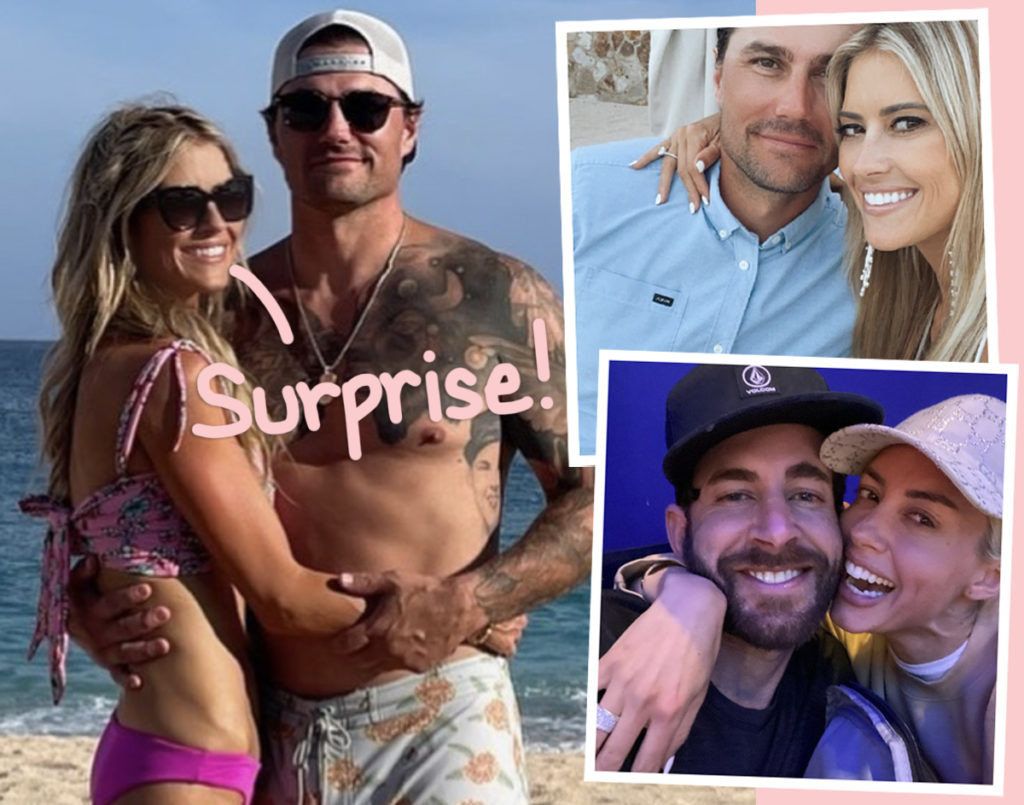 Well, there it is!

Christina Haack is officially engaged to boyfriend Joshua Hall — and the timing couldn’t be more inneresting!

The 38-year-old Christina on the Coast star teased the news herself with a series of Instagram posts that she kept posting and deleting, culminating in a Monday morning photo dump showing off a flashy diamond ring along with several photos of a super-romantic dinner the pair shared.

She also updated her Instagram bio to include a ring emoji next to Joshua’s name — sure-fire proof that the duo has made a commitment to spend forever and ever together! Congrats!!!

The pair is down in Los Cabos, Mexico right now to celebrate Joshua’s birthday, and things are clearly going very well! So well, in fact, that we’re wondering if she’s specifically using the trip to one-up her ex, Flip or Flop co-host Tarek El Moussa, who is about to get hitched again, too!

With Monday morning’s brand new post, the HGTV star didn’t even opt to use words in her caption — just emojis! And the emojis that tell a story which, as you can see (below), make it pretty clear that he popped the question and she came back with a big ol’ YES:

A heart, an infinity symbol, a lock, a key, and a ring! Love it! What more do y’all need?!

Related: Tarek El Moussa Finally Opens Up About THAT ‘Flip Or Flop’ Fight With Christina, And…

This follows a separate photo of the pair down in Mexico that Christina shared on Sunday that seemed to pre-empt this morning’s announcement in its own way, too.

With Sunday’s beach-side snap, the Flip or Flop star wrote a very inneresting celebratory caption seriously hinting that forever was on the table for her and the beau on that one:

“Happy birthday baby. You give me that teenage kinda love vibe and manly protection. It’s a combo for a lifetime of happiness + success. Thank you for reminding me what life and love are like when you put down the technology. I love you Josh.”

Talking about “a lifetime of happiness” there — with another infinity symbol, BTW — made pretty clear what is now official as of Monday: get ready to ring the wedding bells already!

ICYMI, ch-ch-check out that pre-emptive Sunday snap and cap down (below):

Like we said, add that to Monday’s emoji-filled photo dump and yeah, it all seems pretty obvious looking back, doesn’t it?! Either way, we’re very happy for these two! May this love be the forever happiness they seek!

Announcement aside, though, can we talk timing for a second??

El Moussa is literally just a few weeks away from getting hitched to Selling Sunset star Heather Rae Young, and it’s no secret that he and Christina haven’t exactly had the easiest time being exes who still work together since officially splitting up way back at the very end of 2016.

Is it a coincidence that Christina would choose right now to share her engagement news? Nothing like line-jumping your ex and stealing the spotlight before his wedding, right??

Look, we’re not saying she intentionally rushed a romance (she and Joshua only met this past Spring) to beat her ex down the aisle. Plenty of people fall in love and get engaged in just a few months. But if she’d wanted to, she certainly could have waited until after the wedding to make her own announcement.

Knowing the ex-pair’s volatile recent public history, too, Tarek probably isn’t too happy about it!

Related: Tarek Reportedly Tried To Can The ‘Flip Or Flop’ Crew After The Ex-Couple’s Blowout Fight!

And this isn’t even the first time the couple’s engagement content has been teased out on social media!

TWICE in the last six weeks, eagle-eyed fans have spotted Christina wearing what appears to be an engagement ring on her left ring finger, only to have the snaps scrubbed from social media. Back in August, she got caught posting a photo of herself and Hall with the ring visible on her finger, but she quickly deleted it and re-posted one without the jewelry showing.

So this engagement — and the rumors and rumblings around it — have been brewing for a while!

What say U, Perezcious readers?? Did Christina push out this engagement news right now specifically to one-up Tarek ahead of his wedding day?! Or are she and Joshua so in love that they just couldn’t wait and jumped in anyways??

Sound AWF down below with your comments about Christina’s engagement and all the rest of this crazy contractor controversy!!!