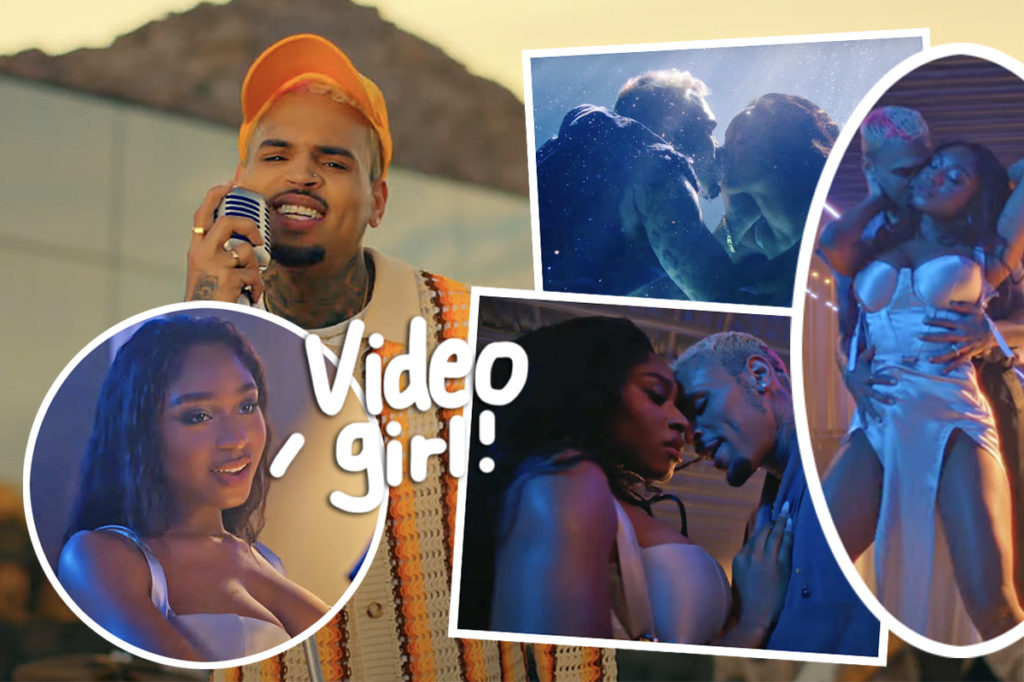 Normani has yet again found herself as the leading lady in a controversial music video! And this one could have been SO easily avoided!

The Fifth Harmony alum made a surprise appearance in Chris Brown’s new visual for his song WE (Warm Embrace) — and it is sparking lots of HAWT takes on social media!

In the new vid that dropped on Tuesday, the Kiss Kiss crooner starts by falling from space through the galaxy, eventually jolting awake from a dream. He then notices someone has arrived at his house, and it’s none other than the 26-year-old pop star looking fine AF!

The duo proceeds to seductively dance in a dimly lit room, with Normani grinding on Chris’ knee at one point. The romantic movements then take them into a pool where they make out under the water. Finally, while they’re relaxing in Normani’s car, a UFO appears above them and whisks them up to space! It’s a wild ride — ch-ch-check it out:

Buuut considering Chris’s history with violence and many abuse allegations, is he really the person Normani should be teaming up with as her solo career takes off?!

Most fans DON’T think so and they made their opinions loud and clear on Twitter. Read some of the most savage takes on the new video (below):

“idk why the new rnb girls feel the need to collaborate with him. first Ella Mai, HER, Chlöe [Bailey], now Normani. it’s disappointing. i can’t even say i get it bc he has repeated his behavior toward women, kicks darkskin women out of clubs he’s in and has made the same song since 2012”

“nobody on normani’s team should have to tell her to not work with chris brown when we all had functioning brains when the abuse happened and he’s had a reputation since. it’s not about her being protected it’s about her supporting him. normani is grown and didn’t care, that’s it.”

“why would normani do this to her own career chris brown? Seriously??”

“Chloe got a collab w him. Normani in his video. Lizzo said he’s one of her fav ppl. Rihanna been forgave him and plays his music. Meg was blasting No Guidance more than her own song lmao. One day yall will realize your favs dont share the same ‘morals’ as u (fake morals that is)”

“normani, you’ve literally been in the Savage x Fenty fashion shows and now this…”

“Normani has actually pissed me off big time because why are you in that man’s music video, why are you working with him, you’re four years into your miserable solo career with no album out, releasing music at the pace of an Internet Explorer search result and instead you do this”

“we were ALL rooting for you. I HAVE NEVER HAD TO YELL AT A GIRL LIKE THIS
@Normani”

You get the point: they are FED UP! And just straight-up disappointed, too, which is just as bad. It’s even costing her some loyal supporters, one person wrote:

“I hope you know you deeply hurt me to my heart. As a dv survivor, you’ve also made it very hard to continue to support knowing you refuse to listen when people are telling you right. As someone who’s went to bat for you daily, my heart is heavy.
@Normani”

Yikes. That’s not good for her!

It’s understandable why fans are so shocked. It’s not like any of Chris’ behavioral issues would be a surprise to Normani. He’s been making headlines for years now — most significantly after he attacked his then-girlfriend Rihanna in 2009. But even in more recent years, he’s continued to face physical abuse allegations, including a rape accusation in 2020. So…

Why align herself with that?! Especially when she’s not even singing on the track!

Perhaps the reason the singer took a chance on the R&B star is that plenty of fans were able to look right past the controversy and just enjoyed the music video like it was some sexy new romance flick! Here’s what those viewers had to say:

“THERE IS NO WAY THIS IS REAL. I AM ACTUALLY GOING TO CRY. CHRIS AND NORMANI. IN A VIDEO TOGETHER. OH MY GOD”

“Chris Brown and Normani  that scene at the pool ”

“Warm Embrace video is unreal, thank u Chris Brown and Normani for this masterpiece ”

“Chris and Normani’s chemistry is unrealllll, they did that, WOW!”

Such polar opposite opinions! For now, Normani doesn’t seem too worried about the negative reactions (though maybe she should be). She posted a clip of the video on her Instagram Story and called it a “f**king masterpiece.” Hmm. Do you agree?! Sound OFF (below)!