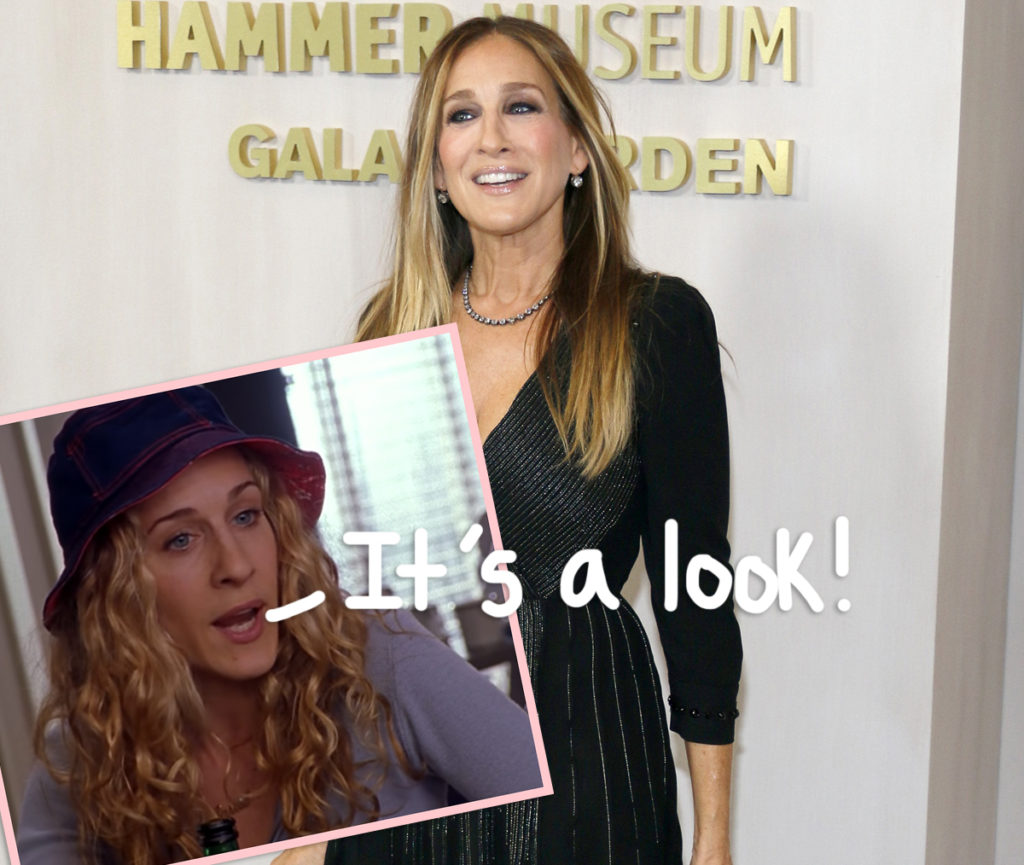 As fans of Sex and the City know, Carrie Bradshaw has always had a penchant for designer items, such as Manolo Blahnik heels, Fendi Baguette bags, and Dolce & Gabbana maxi dresses. All of which matched perfectly with her iconic fashion identity. So when Sarah Jessica Parker recently showed up in a Forever 21 dress on the set of the revival, fans were absolutely gobsmacked (and so were we)!

In a recent behind-the-scenes shot from paparazzi, the 56-year-old actress was caught wearing a paisley print maxi dress layered over an oversized blue button-down shirt. Of course, based on the picture, no one would have thought much of the entire — especially when the accessories matched her character’s usual fare. However, the Instagram account And Just Like That Closet uncovered that the dress was actually from the fast-fashion brand. Take a look at the outfit for yourself (below):

Related: Sex And The City Revival Set Photo Roundup — The Babies Are All Grown Up!

Not going to lie, she still looks absolutely fabulous! But of course, people had a lot of thoughts on it. While some social media users loved the accessibility update to Carrie’s wardrobe, other fans were in utter disbelief at the piece. We mean, Miranda had previously calculated that her bestie spent almost $40,000 just on shoes! S0, we guess it is understandable. Ch-ch-check out some of the hilarious reactions (below):

“Carrie Bradshaw in forever 21? in this economy???”

“Carrie Bradshaw and Forever 21 in the same sentence, this year is awful.”

“These lewks for the Sex and the City final are horrid!!! They got Carrie Bradshaw in Forever 21…. chilleee… !”

“as long as she ain’t wearing crocs it’s okay”

“So thee Carrie Bradshaw is wearing Forever 21 these days?”

“OMG something I can afford? Here for it.”

Perhaps, Carrie decided to stick to a more realistic budget after  — (MAJOR SPOILER ALERT) — her split with Mr. Big! In case you hadn’t heard, a leaked script of the show revealed that Carrie and Big ended up divorced in the reboot. YIKES! In a partially leaked scene, Carrie opened up to Miranda, Charlotte, and Stanford Blatch about being in a difficult place following their break up, saying:

“Wasn’t I doing well before this? … I was taping the podcast, I was washing my hair. Yes, I wasn’t eating or sleeping, but at least I felt good about my marriage. Now I’m just one of the wives he was taking care of?”

So this could explain the Forever 21 fashion statement! What are your thoughts on the debate over Carrie Bradshaw wearing an item for the clothing store, Perezcious readers? Sound OFF in the comments (below)!