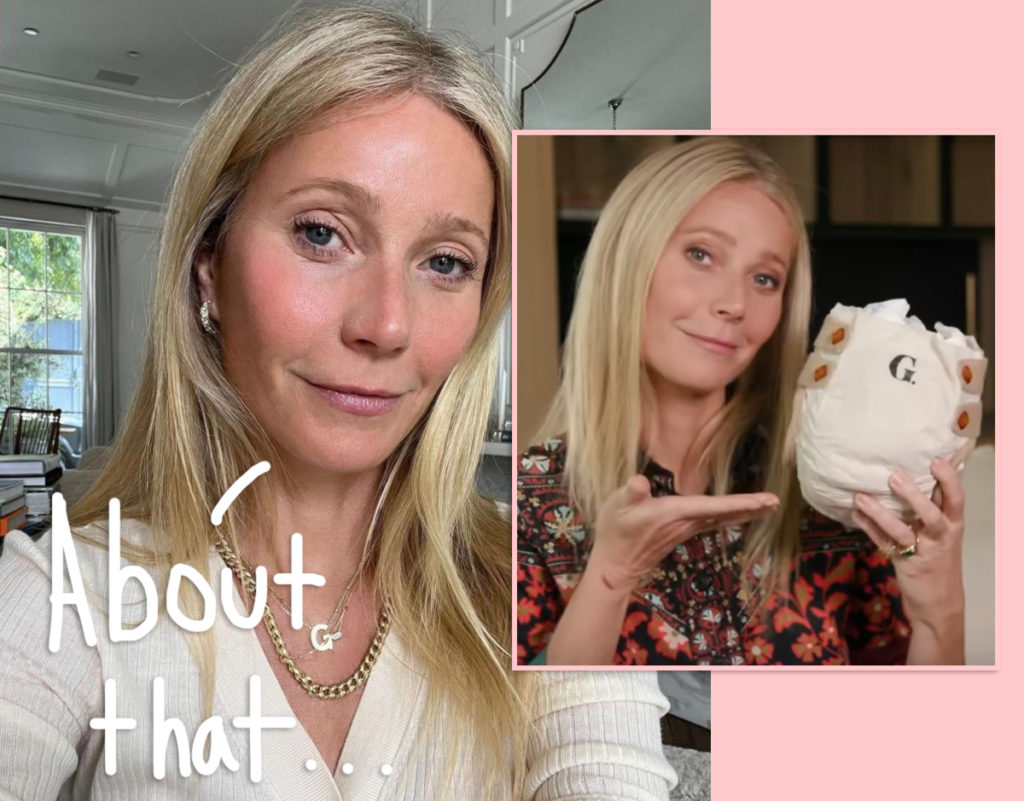 Goop has sold some pretty wild things over the years. (Does anyone else instantly think of the candle that smells like its CEO’s vagina?) However, this latest product may actually have more people raising their eyebrows! Namely parents…

On Wednesday, Gwyneth Paltrow‘s brand took to social media to unveil a new product called the Diapér. As the post details, the item is a “disposable diaper lined with virgin alpaca wool.” It features an “amber gemstone” fastened to the diapers, which are “known for their ancient emotional-cleansing properties.” That’s not the only thing the product includes. It is also “infused with a scent of jasmine and bergamot for a revitalized baby.”

If you thought all of these features were ridiculous, then wait until you see how much these are going for. A pack of 12 diapers — disposable diapers, mind you — is being sold for $120! What?! See the announcement (below):

Diapers are already way too expensive — considering how fast you burn through them — so we really doubt parents would be willing to shell out $120 for only 12! Unsurprisingly, the pricey diaper faced a ton of backlash on social media — especially since the ad came as parents are facing a baby formula shortage. Many also just could not help but wonder whether this was even real! People swarmed the comments section to slam the company, writing on Instagram:

“This can’t be real”

“Is it April fools day?”

“Got to be a joke. Although you never know with GOOP.”

“This can’t be real. There is a formula shortage but your baby can have designer diapers.”

“Yikes, not a good look Goop. How about make some noise on the current formula shortage in the US instead of promoting diapers at $10 a piece”

But it looks like all these outraged folks were fooled…

As it turns out, the product was actually just a stunt! Yep, it was just a fake announcement meant to raise awareness about a serious issue. After causing some uproar on social media, Gwyneth took to the lifestyle company’s Instagram herself to reveal that the product was meant to anger everyone! It was just part of a campaign with Baby2Baby to call out taxing essential baby items like diapers and formula. She said:

“Goop launched a luxury disposable diaper at $120 for a pack of 12, and there was a lot of outrage. Good. It was designed to piss us off. Because if treating diapers like a luxury makes you mad, so should taxing them like a luxury. The Diapér is a fake product meant to shine a light on a real problem. Despite the absolute necessity of diapers, in 33 states they aren’t treated like an essential item. They’re taxed like a luxury good. This leaves one in three families struggling to afford them. While eliminating the diaper tax is not a complete solution, it could allow many families to pay for another month’s supply.”

The 49-year-old actress also asked followers to donate to the nonprofit organization. You can ch-ch-check out her video statement (below):

Phew! She had everyone there for a minute! We mean, Goop has unashamedly promoted some pricey and ridiculous items in the past, like the $1,995 Ouija board and the 24-karat gold sex toy. So it does not surprise us why folks thought she was serious at first!

LOVING how self-aware this stunt was!

Reactions, Perezcious readers? Did you believe Goop was actually selling $120 diapers at first? Sound OFF with your thoughts on the prank in the comments (below)!