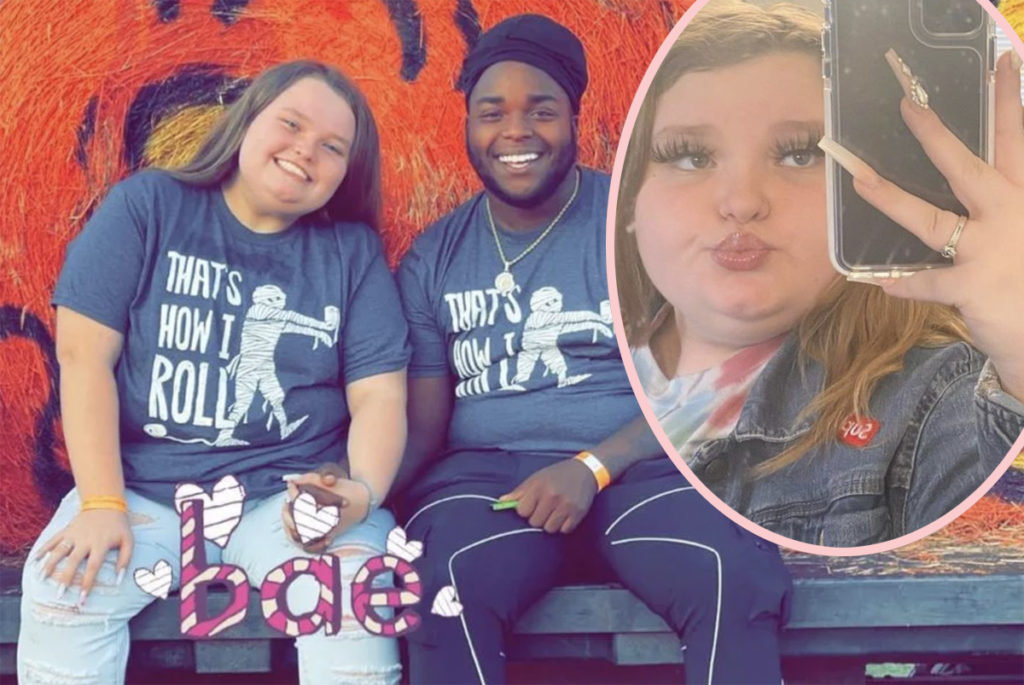 If you were surprised to learn last year that Alana Thompson — the reality star known from her Toddlers & Tiaras days as Honey Boo Boo — was already old enough to have a serious boyfriend, you may want to sit down.

Controversially, we learned last Summer that Alana was dating a 20-year-old college student named Dralin Carswell and had been for over six months — meaning when she was just 15! It’s only a five-year difference, but at that age it’s MONUMENTAL. Now she’s 16 and he’s 21, and s**t just got real. At least, a lot of fans think so.

In a new photoshoot for big sis (and fill-time caretaker) Lauryn “Pumpkin” Efird and her newborn twins, Alana can be seen sporting a ring on that finger. If it isn’t an engagement ring, it definitely LOOKS like one. It’s a big, round diamond on a silver band. You can see it for yourself HERE.

Obviously it sent quite a few folks into a panic. But is she really engaged at 16?! It’s not out of the question. A source told The Sun:

“I wouldn’t be surprised if she’s engaged, but I’d be really happy for her. Dralin makes her happy.”

But this young?? Well, Pumpkin herself was only 16 when she got engaged, and considering Mama June‘s boyfriend track record, big sis is by far the best adult relationship model Alana has. Now Pumpkin didn’t get married until she turned 18 either. And neither could Honey Boo Boo!

The legal age to get married in Georgia is actually 18. Until 2019, a parent’s consent could allow teens as young as 16 to marry but thankfully they realized that was allowing girls far too young to be exploited. Emancipated teens can marry at 17, but not to anyone more than four years older — and as we’ve already mentioned, Dralin is five years her senior.

So no worries she’s getting married any time soon! Alana turns 17 on August 28, so we’re talking over a year.

But the question is, is she even really engaged? All we have to go on is the ring, and frankly we aren’t at all convinced.

A quick look at either her appearances on Mama June: Road To Redemption or just her Instagram page show that gurl likes her jewelry, and she likes wearing rings on that finger. In fact, she regularly wears what look like engagement rings, with a single stone and everything. But it’s just costume jewelry, near as we can tell. It doesn’t mean anything. Here are multiple examples of Honey Boo Boo rocking rocks:

See what we mean?

If she were to get engaged, the fam does seem to approve. They love Dralin, and according to a family source, he has been “like one of the family” for a while now.

What would YOU think if Honey Boo Boo got engaged this young? Do you think she is??