Home » Amber Heard » ‘I Am A Human Being’: Amber Heard Returns To Stand — Says Johnny Depp Fans Threaten To Put Her ‘Baby In The Microwave’ 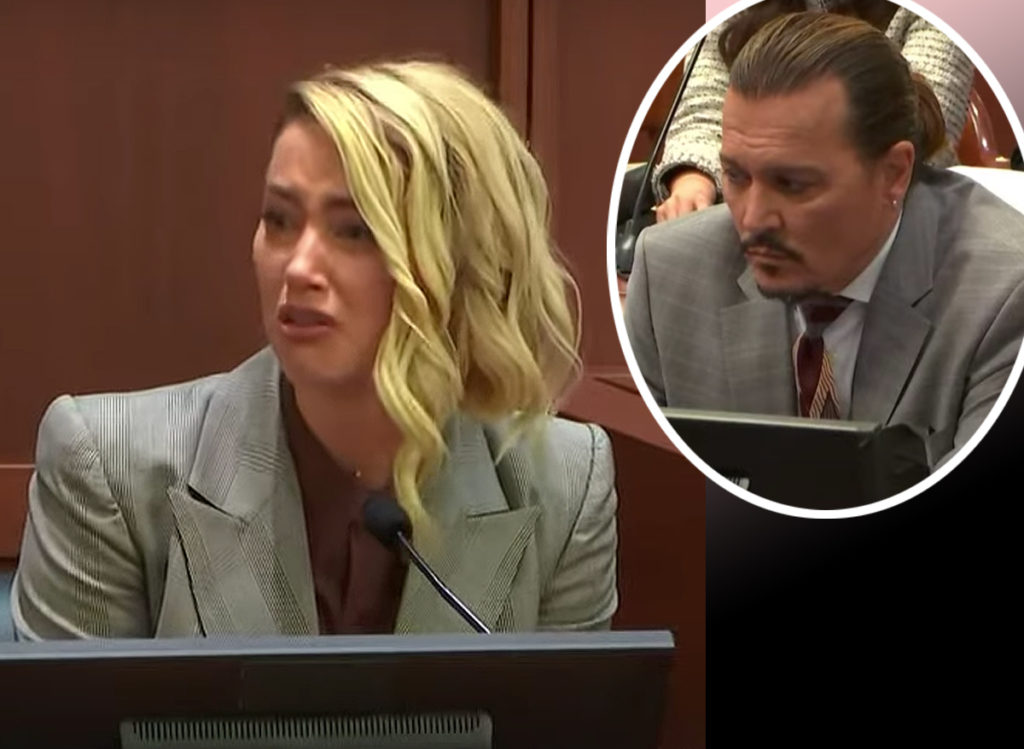 Amber Heard is back on the stand as part of Johnny Depp’s ongoing defamation trial against her, and she grew emotional while speaking on her ex’s alleged “smear campaign” and how it’s ruined her life.

When asked by her own attorney about how Depp’s statement has affected her, the Aquaman star said:

“I am harassed, humiliated, threatened every single day. Even just walking into this courtroom, sitting here in front of the world, having the worst parts of my life used to humiliate me. People want to kill me and they tell me so every day.”

But haters aren’t just stopping at threats to Amber, according to the mother-of-one. She added:

“People want to put my baby in the microwave and they tell me that. Johnny threatened, promised me that if I ever left him he’d make me think of him every single day I lived.”

We wish we didn’t have to say this but… that is completely unacceptable!

Amber, who had 1-year-old daughter Oonagh Paige Heard via surrogacy, went on to make a dig at Johnny, who has been seen snickering throughout the trial, sharing:

“I’m not sitting in this courtroom snickering. I’m not sitting in this courtroom laughing and making snide jokes. This is horrible, this painful and this is humiliating for any human being to go through. Perhaps it’s easy to go forget that, I’m a human being… I don’t deserve this. The attacks on me the campaign that Johnny has elicited millions of people to do on his behalf, torture me.”

When asked how Depp’s statements and past alleged behavior have continued to affect her today, the starlet shared:

“In the harassment the humiliation, the campaign against me that’s echoed every single day on social media and now in cameras in this room. Every single day I live this trauma. My hands shake, I wake up screaming…my friends have to live with a set of unspoken rules about how not to scare me, how to not touch me, not surprise me. Intimate partners have rules about how they can touch me.”

“I have rules about medical professionals….gynecologists I see – for me not to have a panic attack or triggering event, where I relive the trauma, even if I’m training for a movie, Aquaman 2. A trigger happens and I have a meltdown, I have to deal with that because of the damage I have.”

Amber said she is “high functioning” because she has “found a solution to the pain”: doing charitable work. She added:

“I woke up every day with panic attacks until I realized I could do something about it. I’m not a saint, I’m not trying to present myself as one but I selfishly found relief in using what I live through to give a voice to people who don’t have a voice… I would not wish this situation on my worst enemy. As I stand here today I can’t have a career, I can’t have people associate with me and I can’t do charity work.”

Revealing that she regularly receives “hundreds” of death threats and “thousands” since the trial began, the Texas native mused:

“People mocking my testimony about being assaulted. Making fun of…it’s been agonizing, painful and was humiliating thing I’ve ever had to go through. I hope no one has to go through something like this. I just want Johnny to leave me alone. I’ve said that for years now and I thought he would… Johnny has taken enough of my voice. I have the right to tell my story, my voice and my name. He took it long enough. I have a right as an American to talk about what happened to me, to own my story and my truth. I have that right. I hope to get my voice back and I’ve said that from day one.”

No matter what your thoughts are on this trial, who is telling the truth, and who deserves to win, it should go without saying: threatening either party is simply beneath contempt.

Thoughts on Amber’s new remarks? Watch the clip (below) and sound off in the comments.

[Image via Law and Crime]