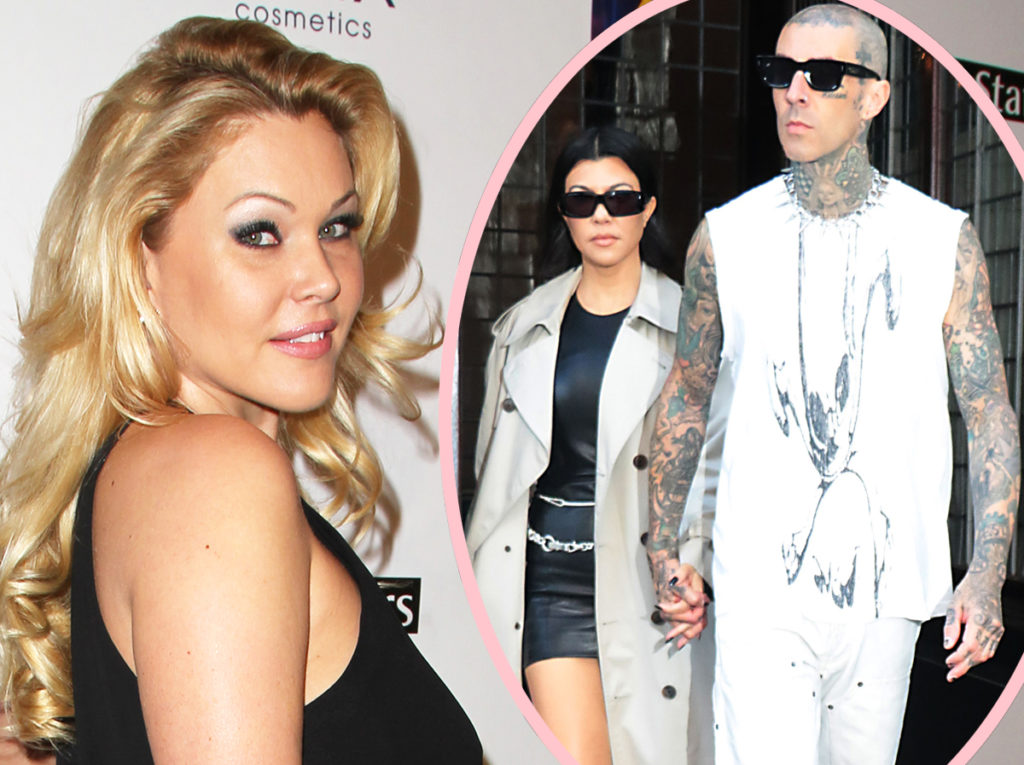 It can’t be easy to see your ex ride off into (or propose during) the sunset with the woman you previously accused of “destroying” your family. Not to mention, all her kids (including her daughter with Oscar de la Hoya) were there to celebrate the engagement and will likely appear when the whole thing airs on Hulu.

Related: Shanna Seemingly JUST Reconciled With Her Kids Before The Big Proposal

That’s already a lot to process… but to add insult to injury, Travis Barker followed it up by getting a new tattoo to cover Shanna’s name on his arm and punctuated it with a permanent kiss from Kourtney Kardashian!

And fun fact! Technically, the new tattoo is a “blast over” which is a little different than a traditional cover-up design. What’s the difference exactly? A “blast over” tat still essentially replaces the old one, but it’s unique in that it literally just goes on top of the former ink instead of completely covering it up. It’s a way for those with tattoos to release the past without totally erasing its existence. It says, “moving forward, but with no regrets.”

The former Playboy model may have subtly responded to the situation on her Instagram Story with a screenshot of the ’90s thriller Point of No Return. The caption included a quote from the film:

“I never did mind about the little things.”

So what makes us think this post is tattoo related? Well, she added a lipstick-stain emoji — much like her ex’s new ink. So, perhaps this is the 46-year-old’s way of saying she doesn’t GAF about the drummer redecorating his sleeve. That his ink is one of “the little things”?

It’s in keeping with her current “classic film” theme, too: shortly after the big proposal, the pageant queen posted a pic of herself with the Gone with the Wind-inspired caption:

But before we jump to conclusions, the momma of three has made it VERY clear that she’s not accepting commentary from the peanut gallery about any Kardashian-related drama. She wrote a message to fans saying:

“PSA I haven’t made a comment on anything going on in the world period. So TY to all my new found psychologist [sic], family therapists, spiritual counselors, momsters and desperate housewives … your unsolicited opinions from trash sites have been noted. Whatever would I do without your fortune cookie wisdom.”

Yikes. Shanna may be “closed for spiritual maintenance” following the engagement news, but she still has time to call out the haters!

Anyway, it seems like Kravis is here to stay, so hopefully all the adults in the situation can find a way to get along for the sake of the kids. We mean, Kourt was already pretty involved in Landon, Alabama, and Atiana’s lives, but now she’s graduating to stepmom status. It would be nice if they could all make peace with each other.

And hey, Shanna got her own Travis tattoo removed, so it’s only fair he covers his, right? Everyone is moving on. Hopefully Shanna will get her own ride into the sunset moment, too.