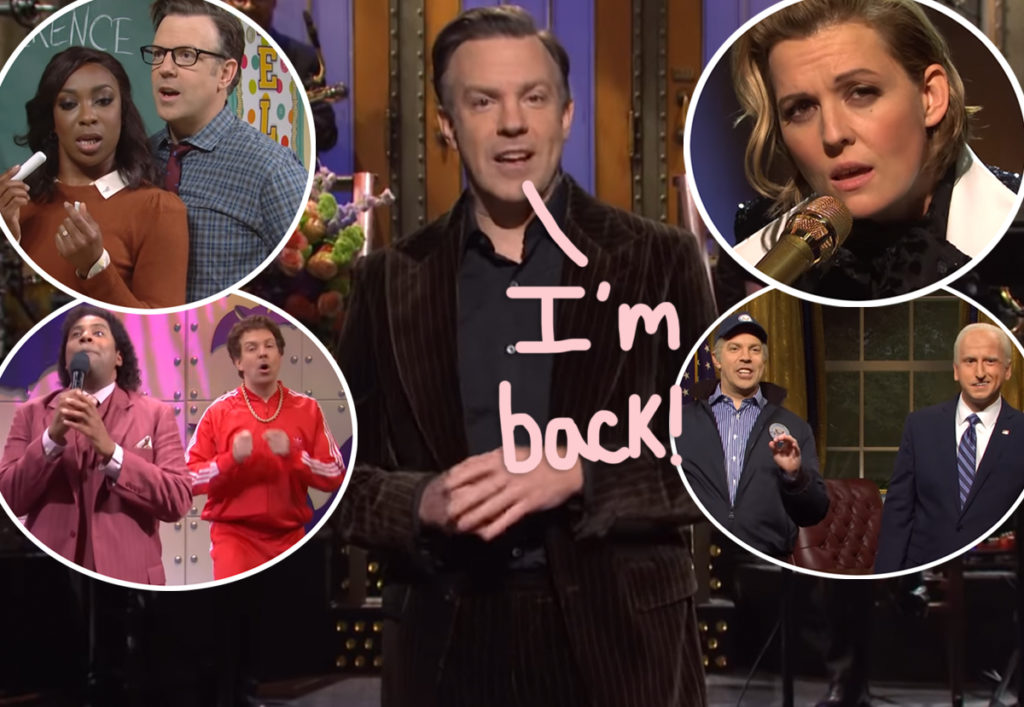 Jason Sudeikis is back and better than ever!

The 45-year-old actor, who was a long-running cast member on Saturday Night Live before leaving in 2013, returned to the Studio 8H stage for his hosting debut on, you guessed it, Saturday. And starting the comedy-filled night, he stepped out onto the set to reprise his role as Joe Biden! Newcomer James Austin Johnson first appeared as the current president in the White House, looking exhausted as he thought about his life before taking on the role. Then, Sudeikis’ Biden swooped in from the past while decked out in a bomber jacket and baseball hat, acting super chill. He quipped:

Cast member Alex Moffat, who portrayed Biden once in 2013, even joined in on the skit at one point! Ch-ch-check it out (below):

Too good! In his opening monologue, the Ted Lasso star got a little sentimental at times and looked back on being part of the history of SNL, quipping:

“For those of you who don’t know, I worked here at SNL for 10 years—an ‘actor’s dozen,’ we say — and it’s so neat to be a small part of this show’s amazing history. A history that was fueled for its first 25 years by cocaine and adrenaline, its next 15 years by Starbucks and unhealthy comparisons, and the last six years by Adderall and fear, I assume.”

Sudeikis also joked about dishing out some career advice while meeting the cast and crew backstage:

“It’s fun to come back and, you know, be the veteran. You know, different folks asking me for advice … like, ‘I love working here, but what should I do next, or how do I get Lorne [Michaels] to notice me? And honestly, honestly, swear to god, I found myself giving the same advice to every single person. I was just like, you know, ‘Win an Emmy! And if you can, win two!’ You know, double up. That’s the best way to do it. It sets you up for success.”

Jason also brought back his character, The Devil, during the “Weekend Update” with Colin Jost, who just broke Seth Meyer’s record as the longest-running host at the desk. During the scene, he got in some solid digs about Jost’s marriage to Scarlett Johansson, saying:

“You baby-trapped her! It’s true! I don’t know who screwed her more, you or Disney.”

Yikes! Check out the funny interaction (below):

At one point in the night, the We’re The Millers alum made out with Ego Nwodim during their parent-teacher conference skit while Kyle Mooney hilariously portrayed her sad sack husband in the background. Watch the steamy moment (below):

Lately, it feels like you never know who is going to show up on the SNL stage — and last night was no different! During Kenan Thompson’s “What’s Up With That” Halloween edition, he brought on some major guests like Emily Ratajkowski, Oscar Isaac, and Nicholas Braun. Oh yeah, and Sudeikis was dancing in a tracksuit while Fred Armisen played the saxophone. Honestly, it was wild, and we’re so glad it returned! Ch-ch-check it out:

Joining Sudeikis as the night’s musical guest was the Grammy-award-winning singer Brandi Carlile. She first took the stage to belt out her song, Broken Horses, into a snazzy golden mic (below):

Later on in the episode: Carlile then stunned with her powerhouse vocals during her track Right on Time (below):

Did anyone else feel like this episode was one giant throwback moment?? In case you missed it last night, here are the rest of the sketches from SNL (below):

What did YOU think of last night’s episode, Perezcious readers? Let us know in the comments (below)!