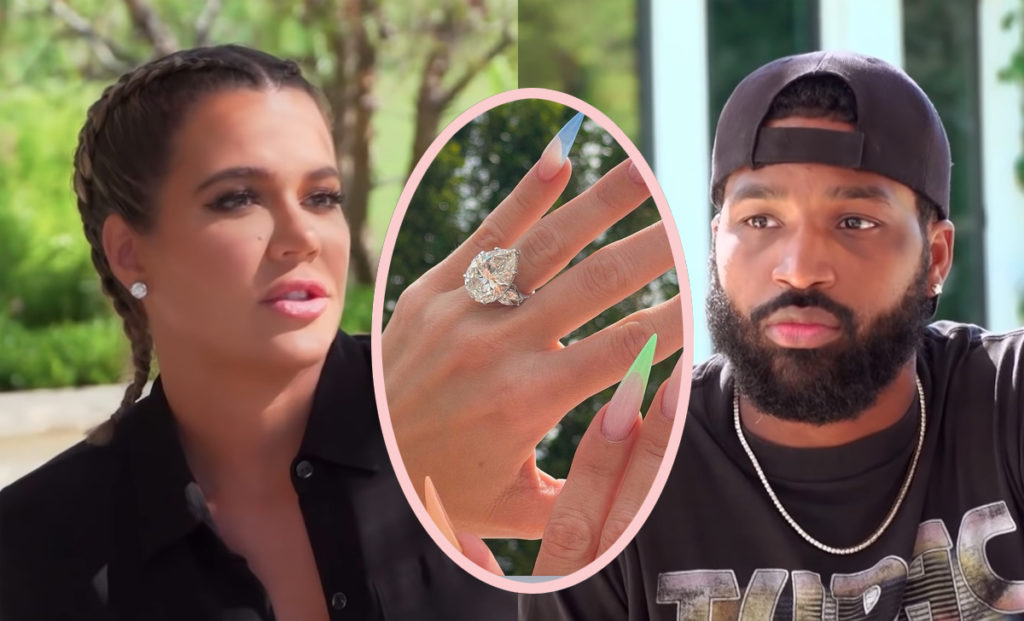 Whoa! Is Khloé Kardashian trying to tell us something?!

The KUWTK star’s troubled relationship with Tristan Thompson has taken a couple more big hits recently. First, an Instagram model named Sydney Chase claimed on a podcast that she had recently hooked up with the NBA star. How recently? She stated later she had been messaging with him as lately as the past few weeks. Well after the reconciliation — and after he’d celebrated his daughter True‘s third birthday party. Ew.

Then the other other woman in Tristan and Khloé’s life, Kim Cakery, who has previously alleged he is the father of her child, claimed she has extra tea — that the Boston Celtics center has been a busy man and sired more children with other women, including one that hasn’t been born yet. Oof.

The saddest part is, this is all coming after the months Khloé gave Tristan to earn his way back into her life. The two even seemingly got engaged at some point. Though they never confirmed that part, the Good American founder was spotted wearing a huge diamond ring back in December and over the past few months has become more comfortable showing it off — like in April when she posted a good look at her nails, and just so happened to give us all a great shot of the MASSIVE rock.

Tristan even acknowledged the not-so-subtle message of the pic, posting the comment:

So yeah, we’re pretty confident they’re engaged. Or… should we say were??

This latest cheating allegation must be a huge blow. And we have pretty good evidence Khloé isn’t fully ignoring Sydney’s claims like she has some in the past, as we’ve seen an (unconfirmed) screenshot of a message from the reality star to the young model, asking if their “conversation can remain confidential.” But is she taking action besides reaching out?

It certainly looks that way. Cryptic Khloé would never come right out and say she’d ended her engagement — heck, she didn’t confirm it had begun! But she did show us something… In an IG Story on Monday, she filmed her left hand resting on the steering wheel of a car (no, it wasn’t in motion, thankfully), and noticeably absent? That giant ring!

Is she trying to tell us something here? To show us the lack of ring the same way she showed us the ring?? This could just be a nail post, but she already showed her nails about four hours before this in another story.

Now obviously she can’t wear that rock all the time. We expect her to take it off when working out or, you know, if she’s ever on a cruise ship as the weight could cause balance problems.

But you’re telling us she just so happened to capture her hand ring-free? Khloé, who is oh-so-particular about every image of her that goes out on social media? Nah, we don’t think so. We imagine we won’t hear the full details of this until later — much later since Keeping Up with the Kardashians cameras presumably aren’t around to film all this — but it’s looking to us like those wedding bells won’t be ringing for Khloé any time soon.

What do YOU think?!