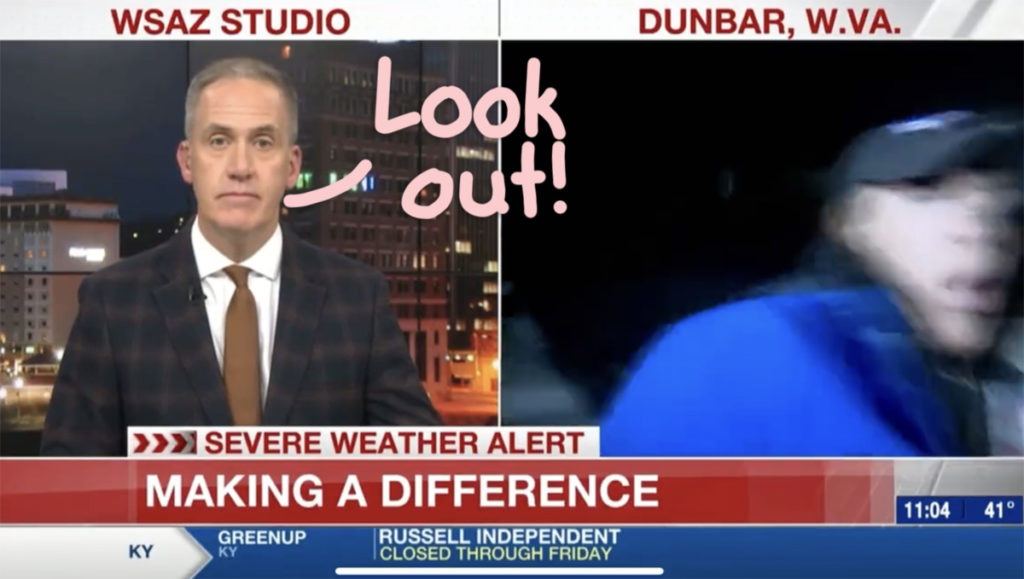 A TV reporter in West Virginia just proved how much of a pro she is by pushing through an incredible situation to continue coverage in an unbelievable live TV shot!

On Wednesday night, Tori Yorgey was live for WSAZ-TV on the scene of a water main break caused by severe weather in the town of Dunbar, West Virginia. Just as she was beginning her live TV hit, and being introduced by anchor Tim Irr from the studio, she was STRUCK BY A CAR!

In a video clip that has since gone viral on Twitter, Yorgey was listening to Irr from the studio while live on camera out on the scene on the cold, dark street in the small town. Suddenly, as Irr was throwing the report to her on location, Yorgey was struck from behind by a large SUV!

Yorgey fell to the ground, and the video showed chaos for several seconds before the young journalist was able to climb to her feet. Keeping incredible composure, Yorgey said (below):

Yorgey also had the presence of mind to joke about it almost immediately, adding:

In response, Irr shows his own composure, never breaking from the camera and calmly answering back:

Yeah, except it’s not a first for Yorgey! The TV reporter shockingly added:

“I actually got hit by a car in college too. Just like that! I am so glad I’m okay.”

Yorgey could also be seen conversing with the woman who struck her. The woman, who remained off camera after leaving her vehicle following the incident, couldn’t be heard speaking. But at one point Tori said:

And after Irr asks her where she was hit by the vehicle, Yorgey responded:

“I don’t even know, Tim. My whole life flashed before my eyes but this is live TV and everything is okay. I thought I was in a safe spot, but clearly we might need to move the camera over a little bit.”

Yeah, no kidding! From there, even more impressively, Yorgey continued reporting to viewers about the water main break and the severe weather in the area! Fellow journalist Lee K. Howard first brought attention to the clip after sharing it on Twitter late on Wednesday night, where it quickly went viral.

You can see the full clip (below):

Wow, this reporter gets hit by a car, and rebounds to finish the live shot! ???? pic.twitter.com/dbwKt5N1xc

As Yorgey notes in the clip, too, Friday is actually her last day at WSAZ and in West Virginia! She begins a new position at a TV station in Pittsburgh next week. So that’s wild timing! We are so impressed by her composure and persistence in getting to the story. Hopefully she truly is OK, and she wasn’t actually injured or in serious pain after all that adrenaline wore off. Such a crazy situation!