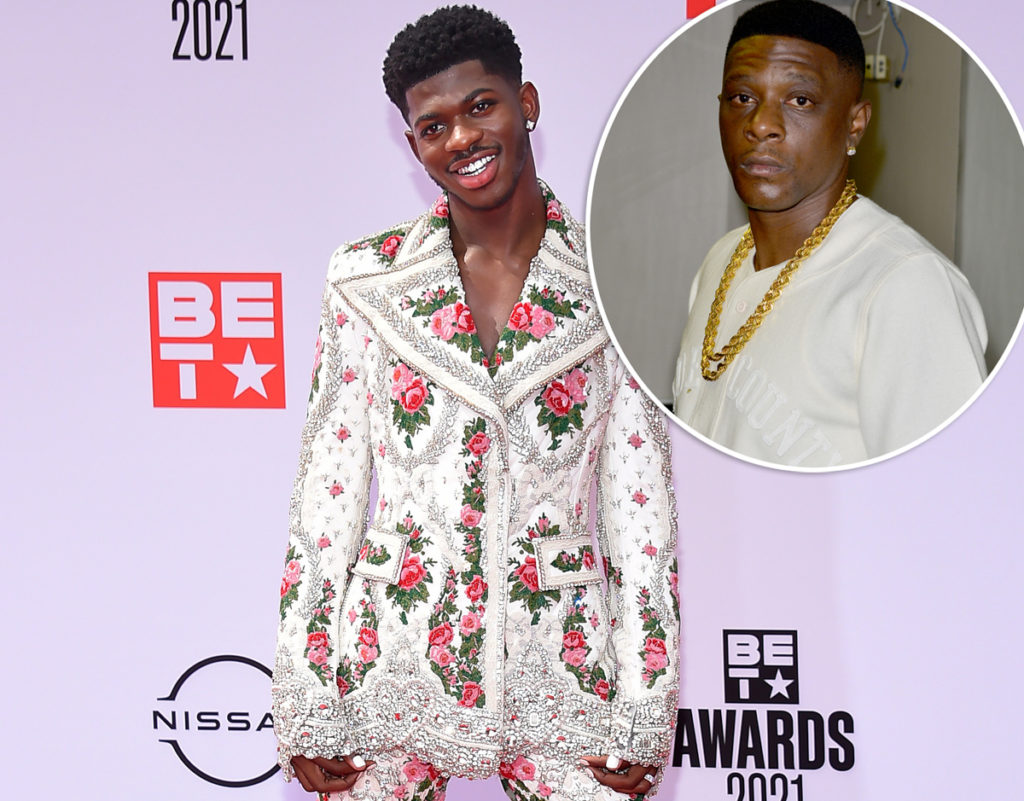 After Lil Nas X jokingly claimed he had a collaboration coming out with Boosie Badazz, the 38-year-old rapper apparently didn’t find it funny and decided to spew a ton of hate and homophobic slurs towards him in response.

The drama all started when the 22-year-old Industry Baby hitmaker hopped on Instagram Live Saturday to poke fun with his followers that he and Boosie were coming out with a new track. Lil Nas X said at the time:

Shortly afterward, Boosie reacted to his naming being brought up by penning a completely vile, expletive-ridden, and homophobic diatribe that suggested the singer should “commit suicide” on Twitter. The father of eight wrote:

“STOP TROLLING ME F***** LOL!! U A WHOLE B***H PLAYING WITH A GANGSTA SMH U CAN KEEP SUCKING D**k N GETTIN F**KED N YOUR ASS N PEACE N #uhateyourself I WOULD TOO IF I WAS YOU LOL NASx IF YOU #commitsuicide YOU WOULD DO THIS WORLD A HUGE FAVOR NOBODY WANTS U HERE.”

Related: Lil Nas X Already Broke Up With His ‘The One’!

Absolutely disgusting. And it didn’t stop there. He also tweeted out:

“#thinkaboutit NOBODY WANTS U HERE”

While the first tweet remained published for a while on Saturday afternoon, it has since been deleted for violating Twitter guidelines. The other two are still up at this time. Following the hateful speech, Lil Nas X seemingly addressed the situation by brushing it off with another joke, saying:

“i am truly saddened. i have never been so mortified in my life. i can’t believe disney channel has yet to play halloween town this entire october.”

i am truly saddened. i have never been so mortified in my life. i can’t believe disney channel has yet to play halloween town this entire october.

This isn’t the first time that Boosie has hurled volatile things at the young artists. Back in July, he reportedly defend DaBaby’s homophobic remarks at Rolling Loud Miami and called Lil Nas X “the most disrespectful motherf**ker in the world.” Then when the Georgia native quipped that he and Jack Harlow planned on performing Industry Baby naked at the VMAs, Billboard reported that Boosie said:

“If I’m at the awards and he go up there naked, I’ma drag his ass offstage and beat his ass.”

And it apparently the list of awful comments Boosie Badazz has made towards Lil Nas goes on and on. According to Billboard, the Old Town Road rapper previously talked about the feud, telling The Breakfast Club in September that his word doesn’t bother him:

“I was listening to Boosie in the club the other day. I don’t really care. Honestly, I wish they didn’t say it, I guess. But I like the music, I’m gonna listen to the music. If somebody got beef with me, that doesn’t mean I got beef with them.”

We would not blame Lil Nas X if he has “beef” with him now, as Boosie’s rant was truly disturbing. Reactions to what happened between Boosie and Lil Nas, Perezcious readers? Let us know in the comments (below).