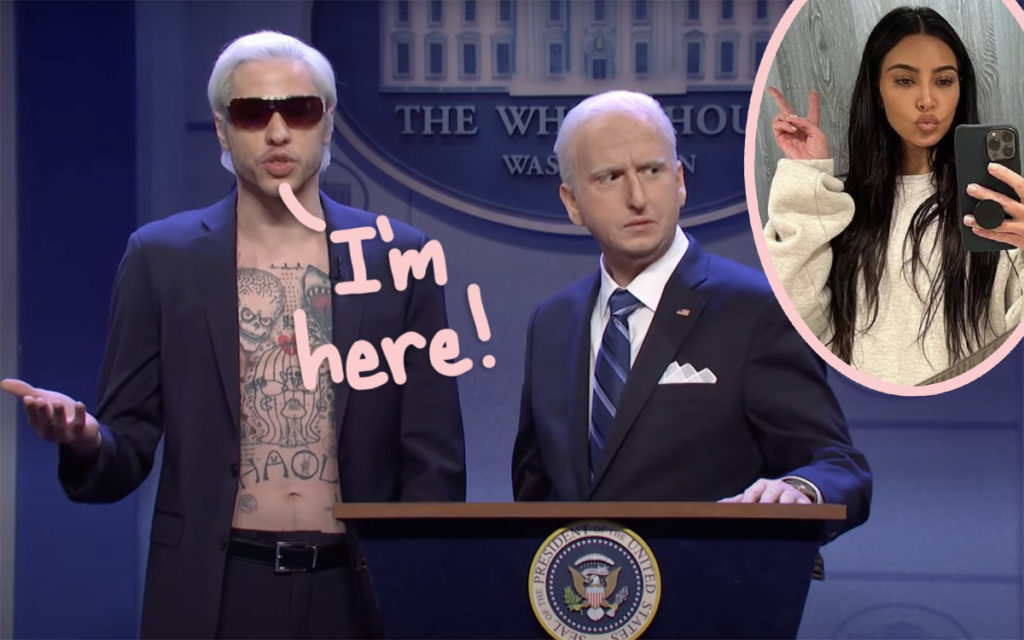 Pete Davidson is reportedly missing some of his responsibilities at Saturday Night Live to be with girlfriend Kim Kardashian… or is he?!?!

A new report published late Wednesday night suggested the 28-year-old comedian was ducking out on his late night TV rehearsal duties to be with the Keeping Up With The Kardashians star.

Related: Pete Jokes That He’s ‘A Steal’ Amid Red-Hot Romance With Kim Kardashian

The Sun published allegations that the King of Staten Island star had been shirking his duties on the late night TV staple.

Speaking very candidly about Pete’s alleged behavior when it came to spending time during the week rehearsing the show’s sketches and skits, an insider straight-up called Davidson a “diva” and explained that the rest of the cast had supposedly had enough:

“Pete has become a total diva at SNL. He missed the first few days of rehearsal last week and was still allowed to be in Saturday’s show. Normally, if you miss any rehearsals, you are out of the show on Saturday night, and the cast is starting to turn on him.”

The insider went on from there, too! Comparing Pim‘s romance to that of Weekend Update anchor Colin Jost and wife Scarlett Johansson, the source added:

“[Pete] also now has security for when he’s outside the building. Colin married an actual movie star and yet Pete is getting more attention.”

To be honest it’s kind of weird to make a couples comparison there when everybody involved is a reasonably big star, and we already know the security detail is for other reasons altogether, but go off?

Related: Kanye Claims Kim’s Security Boxed Him Out From Coming Face-To-Face With Pete!

Our criticisms aside, it turns out the whole report may not be worth much — at least, not according to official SNL sources.

A spokesperson for the show came forward on Thursday morning, in the hours after the report, and denied it completely!

Saying that “no rehearsals have been missed,” the spokesperson laid it all out there in three little words for Page Six:

Would SNL have a reason to lie to protect Pete? Seems unlikely, right?

Plus, the comic was clearly on point during this past Saturday’s episode (screenshot, above) when he joked about his love life in a funny cold-open spoofing President Joe Biden and Spider-Man: No Way Home! So there’s that!

We already know Pete is taking great pleasure in the absurdity of his public “feud” with Kanye West following the rapper’s diss track verse. So we’re guessing Pete is having some fun with this one, too!

What do YOU think of the “diva” claims??