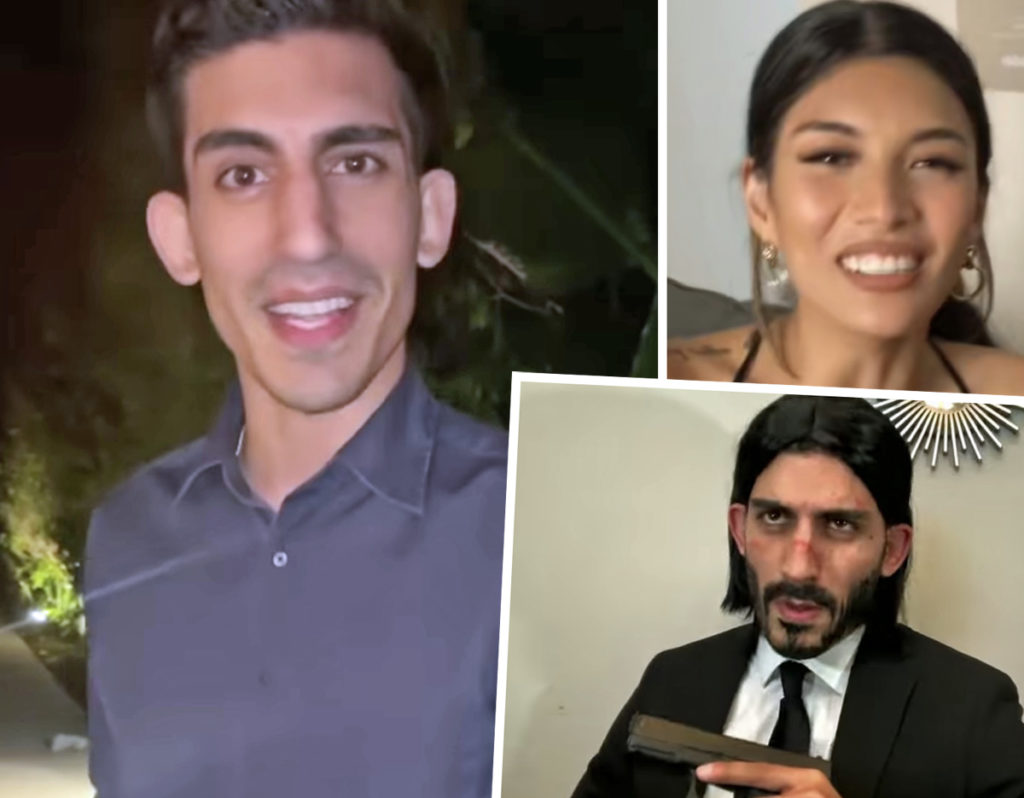 A TikTok star who goes by the handle @Jinnkid has been accused of killing his newly estranged wife and her friend after being convinced he’d uncovered an extramarital affair.

Ali Abulaban, 29, who posts videos impersonating Scarface’s Tony Montana and John Wick (as seen in the lower right inset), supposedly had a history of domestic violence, according to an arraignment on Monday. His wife Ana Abulaban, 28, already filed a restraining order against him and had been planning to seek a divorce. She even asked him to move out of their San Diego apartment last Monday, which Ali did, checking into a nearby hotel.

However, according to prosecutors, without Ana knowing, he kept a key to the apartment and snuck in while she was out. After trashing the place, he installed a listening app on their 5-year-old daughter’s iPad and left it charging in the bedroom before leaving.

Hours later, he overheard Ana talking and laughing with another man, her friend Rayburn Cadenas Barron, 29. Deputy District Attorney Taren Brast says security cameras showed the social media star rushing back into the building and using the elevator to get to the 35th floor of the high-rise. There he burst into the home and opened fire, according to the DA, shooting Rayburn three times at a close range, striking him in the neck, cheek, and back of the head. Ali then turned his attention onto his wife, shooting her once in the forehead. Brast explained what happened next, via ABC4:

Rattled by what he had done, the father went straight to his daughter’s school and picked her up, all with the loaded gun still in the vehicle! It’s a bit unclear if the daughter was aware of the weapon, but she did learn something terrible had happened right away. The DA says Ali:

“…told his daughter that he ‘hurt mommy’ and then he was soon apprehended by the police.”

On that same drive, Ali called the police to turn himself in. They reported receiving a call from the suspect at around 3:10 p.m. as he drove on Route 94. Forty-five minutes later, he was arrested with his daughter still in the car, thankfully unharmed.

Abulaban confessed to the killings, saying it was because his wife had cheated on him. Brast said Barron was just a friend, though it’s unclear what evidence there is to back that up at this time.

Judge Kimberlee Lagotta ordered the potential convict to be held in jail without bail because he is a flight risk and could be a danger to society. She also issued a protective order prohibiting him from contacting his daughter who is staying with a family member. If found guilty, Ali is facing life in prison without parole. Worse, the DA could also push for the death penalty.

The internet personality has been beloved for his impersonations, garnering nearly over 943k followers and 12 million likes on TikTok as well as a large following on Instagram. Check out his last post, shared the same day as the deaths (below):

We’ll be thinking of the 5-year-old girl who tragically just lost her mother and very well could lose her father, as well. Such a sad situation.